“In tradicional Media, the relationship between the information focused on the problem and the solution is quite unequal. Distorts reality is discouraging and deprives people of knowledge to assess the risks and recognize opportunities.” David Bornstein, journalist

Audio Press Portugal is a internacional podcast on multiplatforms for all portuguese speakers all over the world.

Portuguese is the third european language in number of speakers.

We investigate and produce exclusive interviews based on the merit of the Portuguese and Portuguese descendants.

Our presence on FM

We distribute our interviews through a network of partners which includes our local and regional radio stations on FM, the oldest in the country. Are being followed by the web via emigrants because the majority of these radio stations are online too.

Our presense on the WEB

Our distribution network is unique, solid and adds traditional media to digital media.

A year after being implemented (2013), Audio Press Portugal was finalist for the National Multimedia Prize.

In 2014 the mentor of the project, Mafalda Ramos, is honored by the Portuguese State and the civil society, through a Praise, the Noble House of Citizenship. 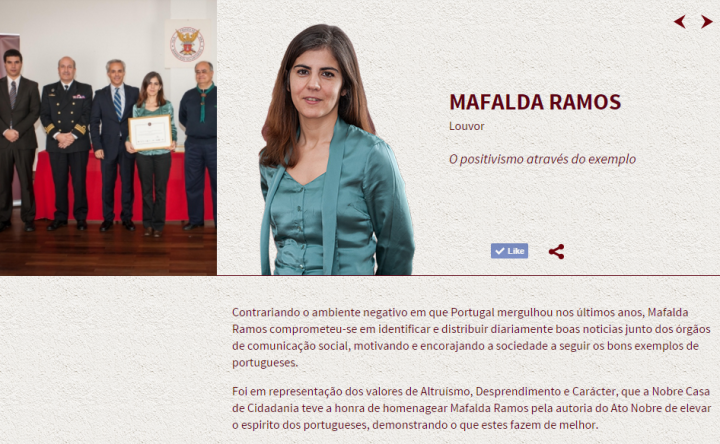 “On behalf of Altruism values, detachment and character, Noble House of Citizenship has the honor to pay tribute to Mafalda Ramos for authoring the Noble Act to seek daily good news, highlighting the best of what is done and exists in Portugal in the last two years.

Altruistically occupies part of their day to motivate and encourage others by giving them hope and examples needed to face each day with determination and lively spirit.”

“I am what I do with what I know. I believe there are much more “positive news” than negative

I want to give voice to merit protagonists and to disclose these positive facts of the Portuguese collective life, motivating us all”. M.R.

Audition from mobile phones has shown a remarkable growth.

After arrange presence in Android via Soundcloud system we are now also present in iTunes (iPad and iPhone systems) with daily audition from dozens of countries.

In the first week of October 2015 the audience via Soundcloud went beyond 400 by day.

On our facebook page are regularly disseminated statistics as well as news from our partners.

Cortesy for this project, from these portuguese maestro, winner of a Hollywood prize.

Music introduction and the end of production of the “carpet interviews”